This is it, folks! With the finals fast approaching, the Robert Gosse Band is working hard to bring you a show you won’t soon forget. 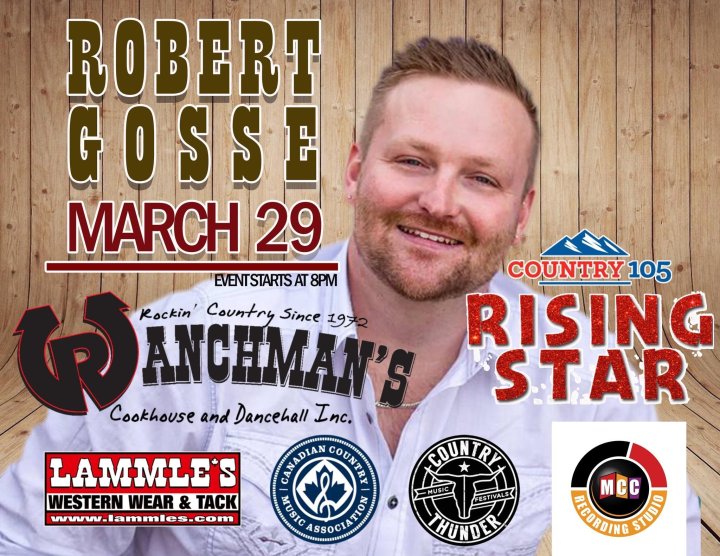 Taking place at Ranchman’s Cookhouse & Dancehall this Thursday March 29 at 8 pm, 4 finalists and 1 wild card will perform head-to-head for the title of #RisingStar2018 at an annual event hosted by Country 105 Today’s Country.

To trump prior years’ prize packs, this year’s take includes a gig on the main stage at Country Thunder Alberta in August.

But that’s not all. Contenders are also eager for the rest of the main prize pack which includes:

The winner will also have opportunity to perform at Ranchman’s events and the potential to be endorsed by Lammle’s for a year.

The performance order will be by random draw prior to showtime with the first act up at 8pm.

We’d like to thank our loyal and monstrous following, fondly referred to as the #GossiePosse for your continued support.

See you on Thursday! “I wanna party with you!”

Happy 12th Birthday to our little monkey! Love you so much!!!!
#hohoho
Lucky number 13! Happy anniversary babe, love you to the moon!
#jennyfromtheblock #gennyfromtheblock
My lovely wife and I. @anthementertainmentgroup
TONIGHT AND TOMORROW NIGHT! Come on down and have a cold one with a HOT BAND!!
#datenightinnashville
The Gosse’s for par!!!!